Exercising During Pregnancy and Discarding the Heart Rate Myth

Physical activity during pregnancy confers obvious benefits to both mother and baby. This is an extremely widely accepted fact in our Western medical community, but since I am spending a fair bit of time here discussing my exercise philosophy and its implementation during pregnancy, I wanted to give at least a brief rundown on a few of the (sometimes surprising) benefits.

First of all, exercise promotes the mother’s psychological health during pregnancy. A 2003 study published in the Journal of Psychosomatic Obstetrics and Gynecology showed that mothers who exercised during pregnancy reported less depression, daily hassles, state-anxiety and pregnancy-specific stress during the first and second trimesters.

For those women who worry about gestational diabetes or preeclampsia, a 1992 study by Lois Jovanovic-Peterson found that mothers experiencing gestational diabetes could, by exercising 20-30 minutes three times a week, lower their blood sugar levels to the point that they no longer needed insulin shots, and at the 2002 annual meeting of the Society for Maternal-Fetal Medicine, Dr. Tanya K. Sorensen reported that vigorous exercise during pregnancy might decrease the risk of pre-eclampsia.

Makes sense, right? The sorts of physical activity that promote health and well being during the rest of our lives would do the same during pregnancy. But even better, exercise during pregnancy might make labor less, well, laborious. A study in the 1991 Family Practice Research Journal showed that mothers who exercised 20 minutes three times a week for at least 20 weeks of their pregnancy had shorter second stages and fewer complications during labor than mothers who didn’t exercise. James Clapp, M.D., reported in 1996 in The American Journal of Sports Medicine that women who exercised during pregnancy had their babies an average of 5 days earlier than non-exercisers and had less need for medical intervention. His research showed that “the active phase of their labors is about 2 hours shorter, clinical and laboratory evidence of fetal stress is decreased, and the incidence of operative delivery (forceps or cesarean section) is reduced from 48% to 14%.” And who would not want a shorter labor with a lower risk for potentially dangerous medical interventions?

And not only the mother, but also the baby, reaps the health benefits of physical activity while in utero, and these benefits continue into childhood and beyond. In a 1997 study from Case Western Reserve University in Cleveland, James Clapp, M.D., found that by age 5, the babies of mothers who exercised for at least 30 minutes three times a week had lower levels of body fat and scored higher on the Wechsler test of general intelligence and coordination, as well as on tests of oral language skills.

So bravo to the health community for recognizing some of the benefits of physical activity.

But I find it very disheartening (yes, pun intended) that another widely accepted “fact” in our Western medical community is that pregnant women, when exercising, should not allow their heart rate to exceed 140 beats per minute – so basically, they should not do anything more than a very light jog. This is not a fact at all, but a guesstimate made in the 1980’s that has been refuted several times over, discarded by the American College of Obstetricians and Gynecologists (ACOG), and denied by the very same doctor who originally came up with the number. 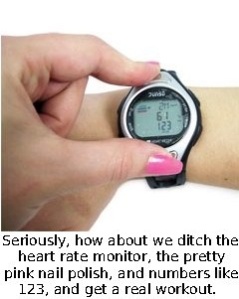 In the early 1980′s target heart rates were the gold standard for measuring exertion during exercise. Dr. Raul Artal and a group of colleagues from the ACOG developed a video on exercise during pregnancy. Artal states that ”We had to come up with a guideline in a short period of time,” said Dr. Artal. ”Nobody had data on pregnancy so we guesstimated. There is no science to support this.” Hmmm. They guesstimated. And they had no science to back their guesstimate. And six months later (surprise) actual testing of women in a lab proved them wrong. Artal said he asked at this point for the 140 beats notation to be stricken from the guidelines.

In spite of his original mistake, though, I am starting to really like Artal. You might want to check out this article on ESPN to see why. He says “I strongly believe pregnancy should not be a state of confinement. If there are no complications, and a woman is willing to continue to train, she can.” His advice instead, based on his subsequent research, is that women should just stay hydrated, be aware of the change to their center of gravity and maintain a workout pace that allows them to breathe easily. To this day, he said, there is no standard limit to how high a woman’s heart rate should be in pregnancy.

As for the 140 BPM gaffe, “For some reason, people caught onto that and they never let go,” he said. “Each time I get asked about it, I said forget about it. I think it should be ignored.” It took them quite some time to recognize the faulty (actually non-existent) research behind this guideline, but eventually, in 1994, the ACOG quietly removed this recommendation from their updated guidelines for pregnancy exercise, and in 2002 they publicly rescinded it.

Yet somehow, 26 years later, the 1985 guideline keeps getting picked up. It has made its way into medical textbooks and has become the uncorrected medical “knowledge” of many obstetricians. In fact, if you google Artal, pregnancy, and BPM recommendations (as I did), the first site that appears is Baby Center, a site which, unfortunately, many women use for information-gathering and which, unfortunately, advocates the 140 BPM rule. On this particular page another obstetrician counters Artal’s more current advice, recommending the 140 beats rule.

It is frustrating beyond belief for me that these decades-old guesstimates are still being advocated by some many medical professionals, and that they are confining women to the modern-day version of the fragile pregnancy myth. This is misinformation that was put out 26 years ago. We have newer and better information that is actually based in research, not in conjecture, and we really ought to stop treating pregnant women as invalids.

I am sharing this post at Primal Toad’s Primal Cave Friday #3.

This entry was posted in Fitness, Pregnancy. Bookmark the permalink.